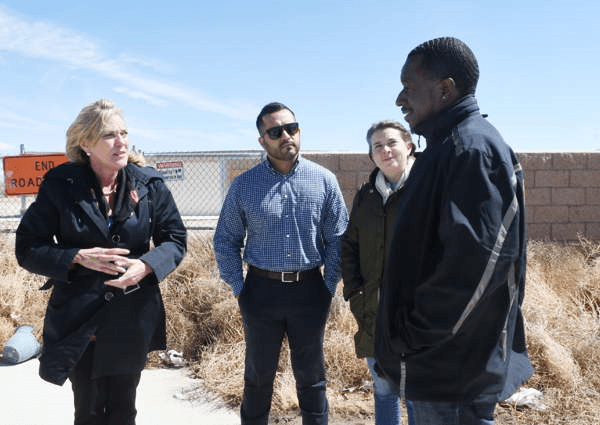 POTENTIAL HOUSING – Los Angeles Homeless Services Authority emergency response team member, Chyheeb Joseph, right, talks Thursday with Los Angeles County Supervisor Kathryn Barger, left, and her staff members, Erick Matos and Dana Vanderford as they check out potential housing for the homeless at a former school building on 150th Street East north of Avenue O in Lake Los Angeles. Below, the county has set up security and a hygiene station on 126th East, north of Highway 138 for homeless encampments in the area. 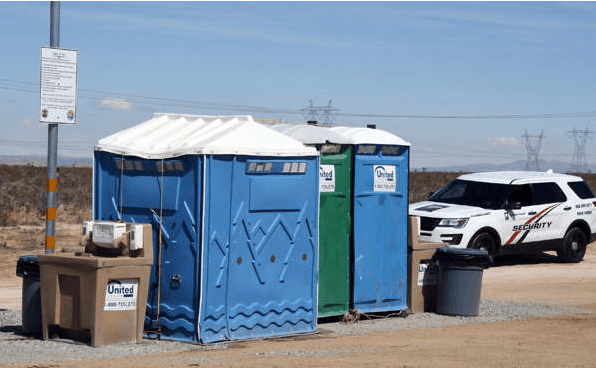 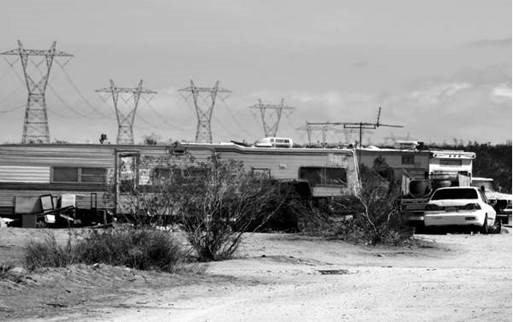 RV SHELTER – An encampment of recreational vehicles sits out in the desert near 126th Street East and Pearblossom Highway, serving as shelter for the homeless.

LAKE LOS ANGELES – The homeless population in the outlying unincorporated areas of the Antelope Valley differs from that in the communities of Lancaster or Palmdale or urban areas of Los Angeles County.

As such, the challenges and approaches to addressing the problem will differ as well, Los Angeles County Supervisor Kathryn Barger said.

“The challenge is it is so spread out,” she said, without the concentrations of homeless people that may be found in less remote areas. “Out here it’s different.”

Among the sites Barger visited is the never-finished school campus on 150th Street East north of Avenue O proposed as a site for serving as many as 300 homeless people.

Officials of the nonprofit Antelope Valley Partners for Health want to turn the 10-acre property into a center in which homeless people including families can live while receiving medical and mental health services, vocational training and other help until they can obtain permanent housing.

The services offered to the center’s residents also would be open to the community, officials said. Expected to be financed by the Measure H quarter-cent sales tax approved last year by Los Angeles County voters to pay for homeless services, the facility was proposed in response to requests that came out of last year’s Antelope Valley Homeless Consortium meetings.

However, before deciding to move ahead with the proposal, more study is needed to see if it meets the needs of the service providers and those being served and if it makes sense given the homeless population numbers, Barger said.

The proposal has been greeted with vehement opposition from community members. The Lake Los Angeles Rural Town Council has formed an ad hoc committee to obtain legal counsel to prevent the facility from moving forward.

Among the complaints is the site’s remoteness, seen as being far from the homeless population it would serve.

“Obviously, the community feels that we are dumping (homeless people) in their community,” Barger said. “I don’t want it to be perceived that we are shipping homeless somewhere.”

Unlike more densely populated areas of the Valley, the outlying areas contain a number of people considered by the county as homeless but who are living in RVs, either on property with the acceptance of the property owner or scattered across the vast open stretches of desert.

For county purposes, anyone living without running water or electricity is classified as homeless, but many of those living in RVs do not consider themselves homeless and are not interested in county services, Barger said.

It is unlikely many of this population will access services even if made available closer to them, she said.

Some of this population is using a hygiene station with portable toilets and clean water set up in a vacant stretch of desert off 126th Street East and Highway 138.

The remote site, from which several RVs and other makeshift shelters can be seen in the surrounding desert, has 24-hour security.

Part of a pilot program in a multi-agency effort to provide services and outreach to the homeless population, the station is used by about 60 people each week, officials said.

The station is part of an effort by the Los Angeles County Department of Public Health to combat the spread of hepatitis A, a disease that is a particular problem in homeless populations, said Erick Matos, Barger’s health and legislative affairs deputy.

The hygiene station is one of the “baby steps” toward bringing needed services to the homeless through outreach, a process that often involves the slow building of trust toward those offering help, officials said.

“It’s a way of us dangling the carrot” to hopefully entice people to access the help they need, Barger said.

With funding from Measure H, outreach in the area has increased with multiple agencies and organizations working together.

The slow, steady work of building trust and relationships with people who are typically wary has paid off in a number of cases, said Chyheeb Joseph, emergency response team member for the Los Angeles Homeless Services Authority.

One example was a man living in an RV in Pearblossom who was brought in for cataract surgery, a step which brings him in line for other services, including housing, he said.

Barger was asked about the frequently-heard complaint from Lancaster city officials that the Antelope Valley does not receive its fair share of homeless funding from Los Angeles County.

“That is a misnomer,” she said.

The funds are allocated based on the size of the homeless populations in various areas, which is why the annual homeless count is so important, she said.

In the Antelope Valley, officials have become better informed on where people are living and are therefore able to offer more accurate accounting.

To share your opinion on this article or any other article, write a letter to the editor and email it to editor@avpress.com or mail it to Letters to Editor, PO Box 4050, Palmdale CA 93590-4050.